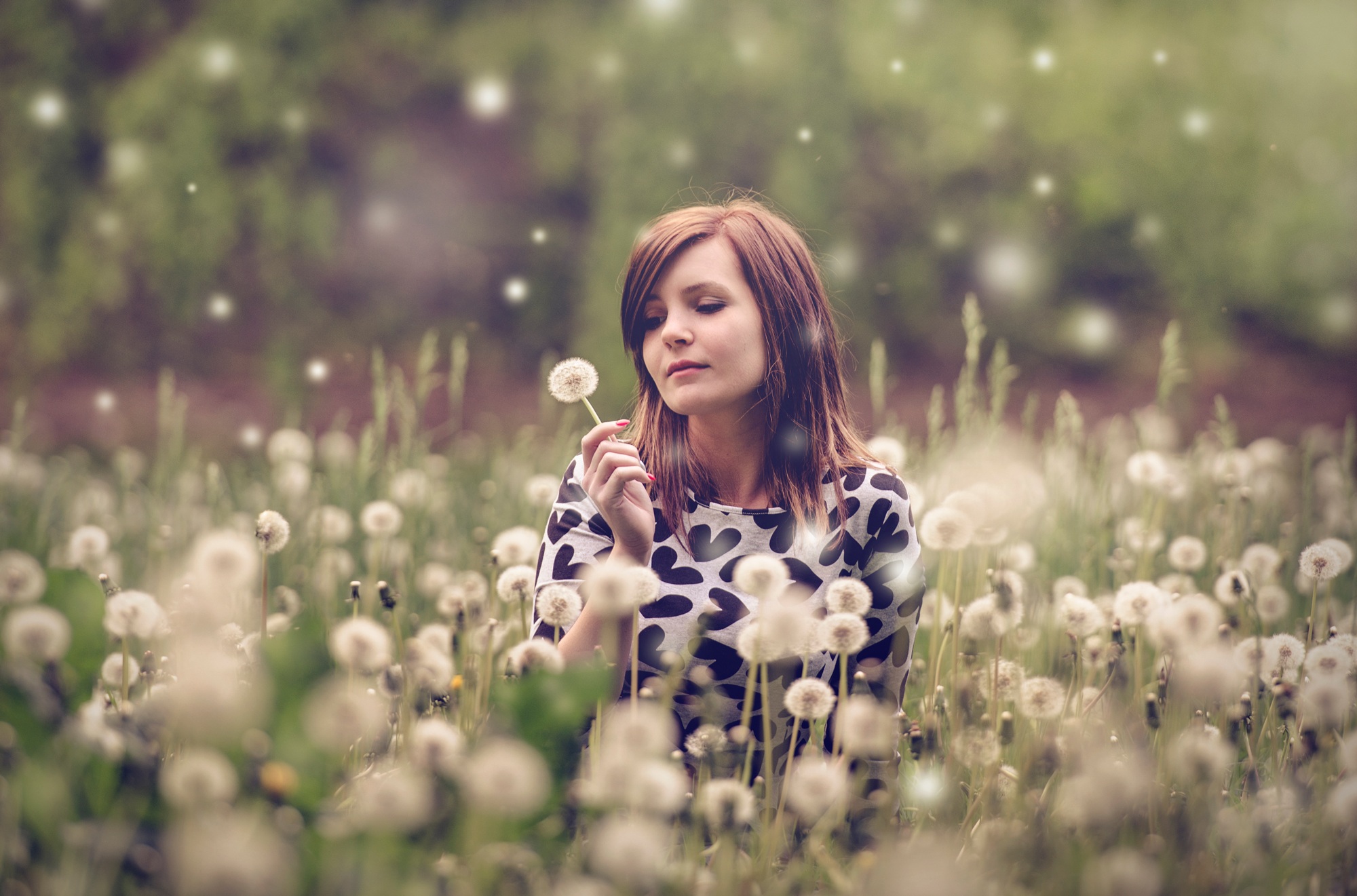 What is ‘Dandelion Marketing’?  How can it help my brand?  What does it have to do with the #AllinChallenge?

To answer those questions, let’s start by considering the dandelion itself – that fuzzy little weed that pops up in your yard, inviting you to pick it up, make a wish, and blow on it.

Well, the wish part doesn’t actually work, but what does work is the dispersal of those dandelion seeds (called achenes, thanks for asking), courtesy of your mighty lung power.

Why do we do that?  It all has to do with a physiological phenomenon known as “fun.”  Yeah, fun.  What other explanation is there for our huffing and puffing and trying to blow off every last little dandelion seed parachute?

But there’s still one more amazing thing the dandelion can do; it can teach us a vital lesson in marketing which is this:

Add an element of fun to your brand’s messaging and people will be happy to disseminate it for you. THAT is #DandelionMarketing. Click To Tweet

Skeptical?  Good.  That’s why I assembled five world-class examples of how brands and organizations have leveraged this force-multiplier that I have dubbed ‘Dandelion Marketing.’

When it came to social and traditional media in 2014, you couldn’t escape the Ice Bucket Challenge.  The viral phenomenon involved filming a person getting a bucket of ice water poured over their head, then challenging three friends to do the same (this all happening nearly exclusively via Facebook).  The original pourer was to donate $10 to the ALS Association, a non-profit that raises money for research on ALS, or Lou Gehrig’s Disease.  Each of the three challengees was to do the same within 24 hours or make an even larger donation, typically $100.  The specifics of these ‘rules’ varied, as did the styles of ice water dumping, but the general template held.

Dandelion Marketing Moment: Millions of people happily sharing out information about ALS research while also raising an estimated $220 million – despite this not even originating as an official ALS Association effort.

The 22 Push Up Challenge

Two years later, a direct descendant of the Ice Bucket Challenge emerged, the 22 Push Up Challenge.  Marine veteran Andrew K. Nguyen created the effort to promote awareness of veteran suicide prevention (the number represented the Veterans Affairs statistic that every day, an average of 22 veterans commit suicide).  Like the Ice Bucket Challenge, this involved people accepting the challenge, then challenging others online in a multiplying effect. Celebrity participants included Dwayne Johnson, Chris Pratt, and Chris Evans, among others.

Dandelion Marketing Moment: Millions of people having fun taking on a social media challenge and spreading it others, all while driving massive awareness of an important, yet under-reported crisis.

The ALL IN Challenge

Businessman Michael Rubin launched the All In Challenge on April 14 with a clear and ambitious goal:  raise $100 million to help those in need due to the coronavirus pandemic.  Unlike the previously mentioned ‘challenges’, this effort is based on auctions and sweepstakes with entry starting at $10.  Said Rubin, “We challenge every athlete, sports owner, team, league, celebrity and artist to go ALL IN and donate one of their most prized possessions or create a once-in-a-lifetime fan experience.”  To date, auction items and experiences range from a shirt worn in space by astronaut Chris Hadfield to meeting the entire cast of Friends.  In less than one month, the effort has already raised nearly a third of its $100 million goal.

Dandelion Marketing Moment: A happy and highly-shareable story.  Beloved actors, athletes, and other celebrities donating (and fans possibly winning) unique high-value items and experiences.  In a word, the whole thing is fun – this against a pandemic backdrop that is decidedly not fun.

So wait, does Dandelion Marketing only relate to charitable fundraisers?  Not at all.  In fact, some of best examples have been used by some of the world’s biggest for-profit companies…

Here in the US, in the summer of 2014 (busy year for Dandelion Marketing), Coke replaced its iconic logo with a series of common first names.  Immediately, consumers sought out and bought (and shared out pics of) bottles that read: “Share a Coke with… Tom”  Or Stephanie or Matthew or any one of 250 names  A year later, the pool of names expanded to 1000 and also included nicknames like ‘Bro’ or ‘Sidekick.’

Dandelion Marketing Moment: Coca-Cola won on sales, but also gained untold millions of dollars in earned media through pics of happy, smiling consumers holding their personalized prize.  In the end, the campaign resulted in an uptick in sales of more than 2%, ending a 10-year slide in consumption for Coca-Cola.

To come full circle, how about a Dandelion Marketing effort from a for-profit business that also helped a non-profit?

The ‘Smile With Lay’s’ Campaign

PepsiCo couldn’t let Coke have all the fun, so in February 2018, its Lay’s brand rolled out the ‘Smile With Lay’s’ Campaign.  The effort featured bags of chips with a special design – at the top of bag, the lower half of a smiling face.  Hold the bag to your face, and it looks like it’s your smile (or at the very least, it looks amusing).  To encourage participation, the brand launched the ‘Lay’s Share a Smile Selfie Contest.’  And the kicker:  every purchase of these special bags resulted in a donation to Operation Smile, an international children’s medical charity.

Dandelion Marketing Moment:  A classic and rare marketing Win / Win / Win:  the consumer had fun interacting with the product, the brand generates positive PR (and hopefully sales), and a charity gets additional dollars (which, full circle, makes the consumer feel good about their purchase).  It was reported that Lay’s would eventually donate upwards of $1 million to Operation Smile.

How Do I Implement Dandelion Marketing?

Another mega corporation using smiles to sell chips and help children in need.  They all have a few elements in common, things that create an outline for how YOU can use Dandelion Marketing.

What do the Ice Bucket Challenge and 22 Push Up Challenge cost?  A change of clothes and a little sweat – plus a few minutes time to post online (which participants are more than happy to do).  A can of Coke, a bag of chips… they cost maybe a buck or two.  But wait, what about the All In Challenge?  Currently, a game of HORSE with Magic Johnson is running at $220,000.  That’s not free.  No, but what is free is this article and thousands like it and countless more conversations happening around the effort.  Like millions of little dandelion seeds, floating out everywhere.

We see this with the Lay’s bags and the Coke cans.  They’re fun and it doesn’t require anything complicated for users to participate and share what they create.  And particularly with the Ice Bucket Challenge, creativity abounded.  You start with a template, a premise, and leave plenty of room for users’ embellishments.

A Chance to Win

We love to win.  We also love to feel like we might win.  If you can add an element of competition to your Dandelion Marketing effort – either through a sweepstakes or User Generated Content (UGC) – your brand might be the one coming out the winner.

Fill in the blank: aware, caring, compassionate, strong, generous, funny, creative…  Never ever underestimate the value of making your customer the hero.  Each of these successful efforts ladder back to social sharing.  But don’t get ahead of yourself – think about why users currently share their own content.  They want to be perceived a certain way.  Hitch your message to something that enhances how they already want to be perceived, and you’re on your way.

Connected to a Cause

Social sharing aside, we know that Cause Marketing has proven itself* as an effective strategy; sell the consumer the product they want at a price they like AND make them feel like they’re helping a cause?  That’s a win.

Let’s circle back to Dandelion Marketing in its original, biological sense.  What’s the premise? You spread the dandelion ‘message’ (multiplying a single weed into probably dozens more) and in return you get a little hit of dopamine happiness.  Fair exchange?  I think so.

So keep it accessible, keep it creative, but above all, keep it fun.

* 78% of consumers reported that a partnership between a nonprofit and a company that they trust makes a cause stand out (2010, Cone Nonprofit Marketing Trend Tracker).